The game of DDOS attacks: Game over

Some insights in what drives an attacker behind a DDOS attack.

The Netherlands was plagued by numerous DDOS attacks lately. The tax authorities, Bunq bank and many other banks and government agencies. The attacker was careless and left some traces and was even arrogant enough to seek contact with the sysadmin of Tweakers.net, one of the targeted sites.

Tweakers.net published a very nice article (original in dutch) describing the complete timeline of the attack and investigation from their perspective.

The attacker, Jelle S., an 18 year old male from Oosterhout, had been caught by the Bunq bank before. In September 2017, Jelle executed several DDOS attacks on the Bunq bank. After extensive research, Bunq discovered that Jelle was behind the attacks. They did not press charges, because Jelle showed remorse. How wrong could they be…

The second wave of attacks on Bunq started in November 2017. Bunq immediately reported it to the police and the police started an extensive investigation. The third wave of attacks started at the end of January 2018 and targeted many more sites. Eventually Jelle was arrested the first of Februari. 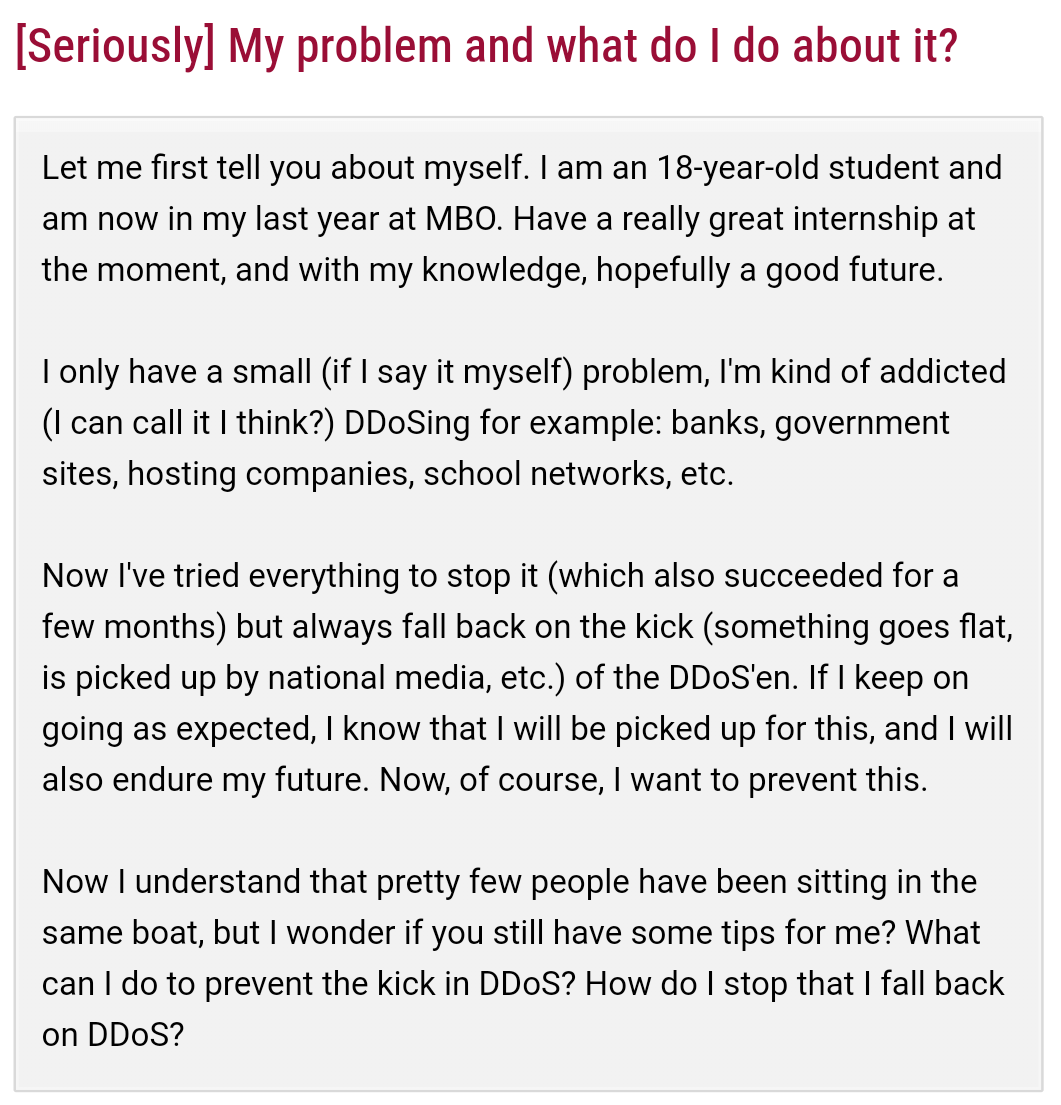 Coincidentally, at the end of December, I stumbled upon a forum post on Tweakers.net (original in dutch). An 18 year old male was seeking help for his small problem (how he described it himself) of being addicted to DDOS attacks on banks, government agencies, school networks and hosting providers. I guess Jelle just does not see the seriousness if his actions. It seems like a game to him. The forum thread was soon closed, simply because Tweakers.net has strict rules and does not allow discussion about criminal activities.

Executing a DDOS is not very complicated. In this case Jelle had bought 40 euro of capacity at a stresser. A service to test your own infrastructure for its DOS handling capabilities. Ofcourse you can also target other sites with it.

The technique used was a DNS amplification attack. Simply said, having very many clients (e.g. a botnet) send as many DNS requests possible to many DNS servers. The request has spoofed the source address to be the victims address and it queries all known information of a DNS zone in one simple and small request. This results in an extreme amount of data being sent at the same time to the victims address.

The attacker reminds me of the behavior of some arsonists. They mingle in the crowd, watching the fire do its job.

He is simply not aware of the severity of his actions. Seeking recogition for his actions, submitting news items, contacting the sysadmin, hanging around to see his results. This all got him caugth. Worst of all, he did not learn from his first offence, where he was very lucky not to be prosecuted. The only fortunate thing is that he is aware of his addiction…

Installing Hardware Backdoors In The Supply Chain
Bloomberg release a very detailed report on how Amazon discovered a hardware backdoor the size of a single grain of rice in servers manufactured by Elemental Technologies.
Read more...
Wordpress Plugins
Recently I was asked to give feedback on a new website. It uses Wordpress, but why? Why not? So I researched a bit and was able to give a well-founded answer. about the risk of having plug-ins installed.
Read more...
Equifax hack
Equifax is a consumer credit reporting agency and last week it got hacked. Now the information of 143 milion US citizens, about 45% of the population, has been compromised by hackers. The hackers got access to names, birth dates, addresses but also social sercurity numbers and in some cases drivers license numbers.
Read more...
Lock picking in practice
Many years ago, I studied the art of picking locks. Not to do anything illegal, but just to learn about locks and how they work. Most importantly, open locks in a non-destructive way the manufacturer certainly did not intend to open. I bought a lock picking set and a practice lock. Over the years I collected some other locks, formerly used in real life. I finally got a chance to show off my skills.
Read more...