Okay, okay, this is some kind of insiders thing. If you dont know what Im talking about from the title of this article, then there is nothing to see. Please move along!

Recently in my OSCP course, I was struggeling a few hours to get a reversed shell connection. It was a FreeBSD box, not quite my expertise. Finally I came up with a simple solution using tail -f. 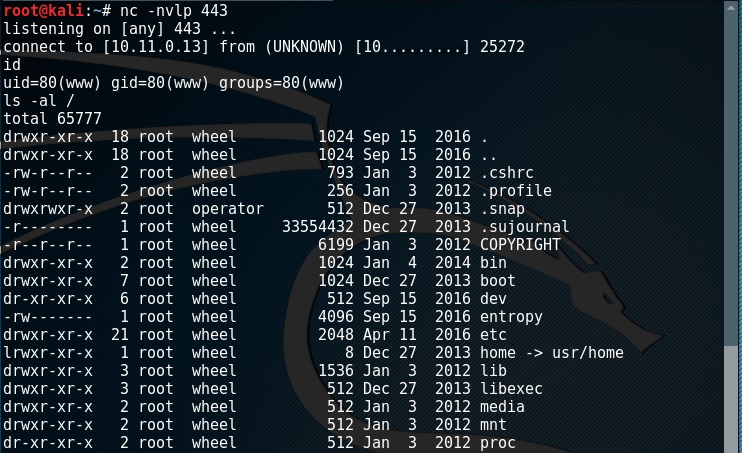 I immediately found that netcat was installed, but ofcourse without the e-option. All references to netcat without -e suggest you use a backpipe to relay standard output from commands piped from netcat to /bin/bash back into netcat. After trying harder for many many many tries, I finally came up with the following simple solution.

That’s awsome! But don’t forget, all your commands are stored in the /tmp/1 file… (ツ)

From many other options I found, none seemed to work. A quick test showed that the famous /dev/tcp/<ip>/<port> did not work either. The following command did not result in any response on my machine.

Ofcourse, after having rooted the machine, I was still wondering whether other options found on the internet could work too. In my case I was able to execute multiple commands by separating them with a semicolon. This way a pipe is created first, followed by: netcat reading input from that pipe, netcat redirecting output to bash, bash redirecting stderr and stdout to the pipe again.

To wrap up, which things slowed me down finding a way to obtain a reverse shell?

If at first you don’t succeed, try, try, try harder!

My Journey to OSCP
Just received the email this morning that I passed the Penetration Testing with Kali Linux exam and obtained my Offensive Security Certified Professional (OSCP) certification. Hooray!
Read more...
Captive Portal Workaround
On many trips and holidays I find public Wi-Fi hotspots, e.g. in hotels or bars, which use a “captive portal” where you have to authenticate before you are allowed to access the internet.
Read more...
Going undercover with Kali
With the new Kali 2019.4 release, Kali comes with an ‘undercover’ mode which make the Kali desktop look like Windows 10.
Read more...
Logging terminal session - continued
As mentioned in my previous article about logging the terminal session, it would be very nice to have the date time echo-ed regularly, to be able to find your way in the log-file.
Read more...